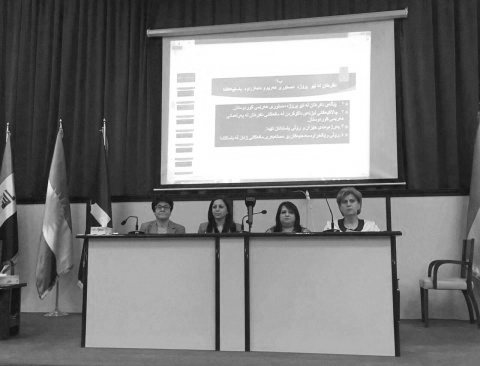 Mrs. Payam A. Kedhr is a current KRG parliament member, a human rights and pro-women’s rights activists and is a current MEMECS member.
She participated in the Women’s International Conference, which was hosted in KRG in March of 2016.
There were many former and current KRG parliament members that participated in this conference in addition to NGOs, government personnel, UN representatives, and many other people and groups of importance.
The conference discussed many topics, which includes but is not limited to:

Promoting the role of women and pro-women organizations to exert more pressure on juridical bodies with regards to pro-women legislations, such as emphasizing the rights of women in the constitution, passing laws that protect women, and providing gender equality.

Unifying the efforts of women to apply the laws written in KRG draft constitution.

Unifying the efforts of NGOs to help displaced and refugee Azidi women and children.

Apply pressure on the government, United Nations (UN), and international organizations to help with applying pro-women resolutions such as the UN Resolution No. 1325.

At this conference, Mrs. Khider presented a panoramic picture of the most important laws and legislations issued by KRG parliament since 1992 to present day, emphasizing the role that women’s organizations have in preparing, submitting, and issuing these laws and legislations.